Last weekend I attended the AMG forum gaming weekend near Kenilworth. There were about 20 of us, including forum members, forum ex-members, and at least one person who was neither!

Just like last year, it was an excellent crowd and we had a lot of fun both during the gaming sessions, and during the bar sessions. Apart from our group there were 300+ other guests in the hotel, all there for a Dancing with the Stars weekend. We didn’t mix much 🙂  – although a couple of gents did pop by to have a look.

Stuart organised an excellent and smooth-running event. Big thanks to him.

The games were all top notch; Graham with Falkirk, Colin with Leuthen, Martin with the Sudan and Paul with Ramillies. I wanted to play all 4 but only managed Leuthen and Ramilies. Both were excellent, and very well run by friendly and helpful hosts.

The Sudan (obviously), done in grand style by Martin, with lovely figures, using Sands of the Sudan:

Unfortunately my pic of Graham’s excellent and very popular Falkirk game didn’t come out, so this is the best I’ve got from that. Lovely British cavalry.

Day 1 – I played as one of the Austrian commanders in Colin’s superb Leuthen 1757 game, using the Honours of War rules.

Robbie and Gary were on the flanks and we faced Chris, Jim and Tony as the Prussians. Fittingly, Jim (Der Alte Fritz) played as Frederick.

The Prussian grenadiers charge the church wall. They got in once, but I managed to push them back out with my reserves.

Repeating the Prussian’s dramatic success on the tabletop isn’t as simple as Frederick made it look. It was close in the end, but was declared a win for the Austrians.

Day 2 – I joined Paul’s tremendous refight of the southern half of Ramillies 1706 (ie. the cavalry action and the village on the French extreme right flank). We used Paul’s own rules from the Grimsby club, which are straightforward but give lots of period flavour. I took the right-hand French, with dismounted dragoons in the village, infantry alongside, and some of the Garde squadrons on my left.

We had a lot of cavalry clashes early on, and then the infantry came forward to carry on the fight. It was slightly unique as an 18th century wargame in that there were no artillery on the table (other than a couple of attached light guns). It made a nice change.

Below – waiting for the dreaded Dutch guard to arrive and commence their deadly platoon fire. Fortunately I was able to get some flank supports in place to help see off the first battalion! After that it was a matter of holding on. 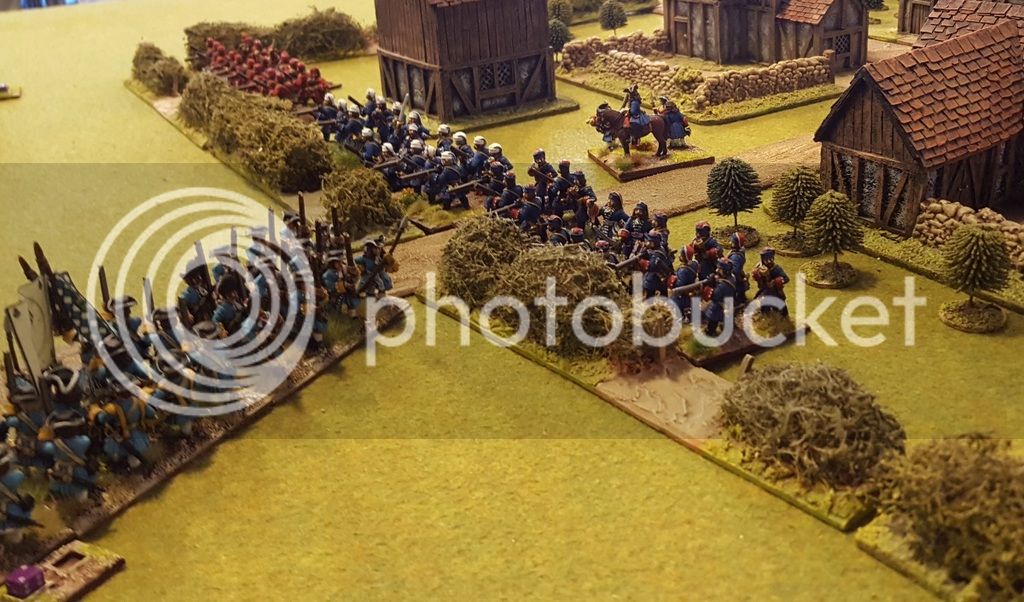 Aly and Leigh battled it out at the other end of the table, with Steve commanding the French centre and Ken fighting us with Dutch and Danish. We got a solid result on the left flank, with Aly’s battalions mostly sent packing, and in the end the French were declared the victors. 🙂

A few general scenes. There was always a lot of banter and laughter in the room, making for an excellent atmosphere (which was needed as it was bloody warm with the aircon only partially working)!

The hotel wasn’t a bad place to have a few post-game beers, and the weather was amazing too!

Aly brought along a couple of sets of the Perry’s new Travel Battle game, which looked nice painted up, and Mark brought a 6mm version of The Wargame which was very impressive. Chris showed off some of his lovely period-art too, so there was something to see in every corner of the room.

Great stuff all-round then, and very motivational from a hobby perspective.
Hopefully we’ll be doing it again next year (albeit under a new name I suspect).