A couple of weeks ago I played in a very enjoyable 4 player game of DBN. The figures were 10mm, mostly using Goat Major’s lovely 1809 collection, but with a Corps of Prussians from Andy and a very small contribution from me (Austrians and Bavarians). 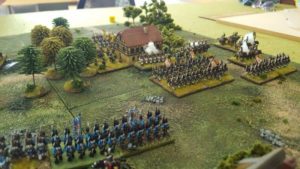 It would have been a bigger contribution but I have to admit that I struggled with painting these figures, especially at first. These Pendraken figures are too detailed to get away with a rough ‘6mm style’ of painting, but small enough that everything is fairly tricky. After a few elements’ worth I started to get the hang of them, but I didn’t get as many done as I’d intended.

The beauty of DBN is that although we clustered round a very small (3 foot by 2 foot) board, we played a proper Napoleonic battle with the equivalent of 2 Corps per side. The rules work very well and the figures and scenery looked good. Goat Major and I just about held on in a fairly bloody affair. 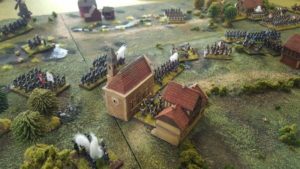 Some of Andy’s splendid Prussians: 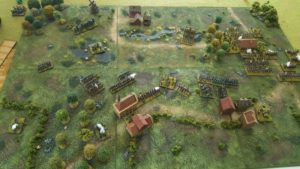 I have continued (slowly) painting some more figures for this and will aim to finish my intended Austrian and Bavarian Corps for future games. Despite over 30 years in the hobby these are the first proper Napoleonics I’ve collected, which probably puts me in a tiny minority of gamers. I do, however, already understand the collecting megalomania that can follow, along with the desire to play in bigger and bigger games!

We (members of the Loose Association of Wargamers) returned to Tim H’s very pleasant home village of Framlingham this weekend. We were last there for a wargaming session in 2014, time has flown! Ten of us gathered on Friday evening, got quickly caught up and enjoyed a good curry and a decent amount of beer. The banter was lively and continued throughout the weekend.

There were some very good games put on, two on each day. I was crap with the camera and only managed a few pics (my apologies to Tim for not getting some of his excellent FIW and Sci-Fi – both in 54mm!), but others did a lot better and Andy’s blog is a good place to visit to see a lot more – here

When Alex and Peeler offered a big DBN game of Vittoria I volunteered like a shot. They made a custom battlefield in the last week or so, especially for the game – a brilliant effort. Alex was Wellington and Peeler took the part of the King Jerome. I took the part of ‘Daddy’ Hill and Gary got the late arrival columns under Graham and Dalhousie. On the other side of the table were Simon and Andy as the two French sub-commanders. The scenario was an interesting one, with the French deploying in their historical ‘caught on the hop’ positions and the allies piling on the pressure and trying to close in from various angles.

Alex setting up on Friday:

The start of the battle, with my command aiming straight up the road and looking to get around the French flank on the slopes to the right.

The first of Andy’s rearguard are dead and we’re on our way, albeit a bit slowly due to being unable to make additional/march moves.

Mid-battle – Dalhousie has arrived on the other side of the river and Hill and Wellington are chasing the fleeing Frenchies up the valley:

Gary did very good work trying to storm over the bridges, taking big casualties but dealing the same out to the waiting French. The fighting intensified on the river line, but was petering out on the other flank as we failed to pursue as fast as Andy routed. The highlight was Alex canistering Andy’s command figure with a deft bit of horse artillery work – a quality moment (for us) and I was forced to drive my battery over the remains as we intensified the pursuit. In the end, we didn’t get as far up the table as we would have liked but we did bring the battle to a successful conclusion a couple of turns from the end by destroying the requisite number of French elements.

As always DBN provided an excellent big battle experience and the game was a pleasure to participate in. Thanks to Andy and Mark for the effort that went in, and for everyone for the great spirit in which the game was played.

The second day’s gaming involved an excellent fictitious colonial game set in the pre-pith helmet era. This was all Paul’s creation – terrain, scenery, most the of the figures, the plot and even a full set of rules. Very very impressive stuff all-round. We were 3 a ‘side’ (there were some cunningly conflicting player objectives) and each of us had an interesting force with its own background and characteristics.

I got sailors (for which I got to provide most of the figures) and there were forces of sepoys, jungle-loving natives, semi-regulars and fanatics from various factions. None-the-wiser we all got stuck in and Paul ran the game from a nicely illustrated set of cards he’d made. The rules were simple to learn and we could focus on the action and the fun. There were events to keep us on our toes too, such as tiger, snake and monkey attacks!

As you’ll see from the pics it was a lavish affair, and kept us occupied, and laughing, well into the afternoon. By the end, Alex’s regulars had been wiped out in the jungle in their own special ‘Nam by the local savages, Andy had been wiped out by Simon’s accurate muskets and bayonets and I had been finished off by Simon’s backstabbing ambush. He declared innocence, it all being a big misunderstanding, and so on. Yeah, yeah. Simon and Gary were the ones to achieve their missions in a thoroughly entertaining game. Thanks again Paul – awesome! 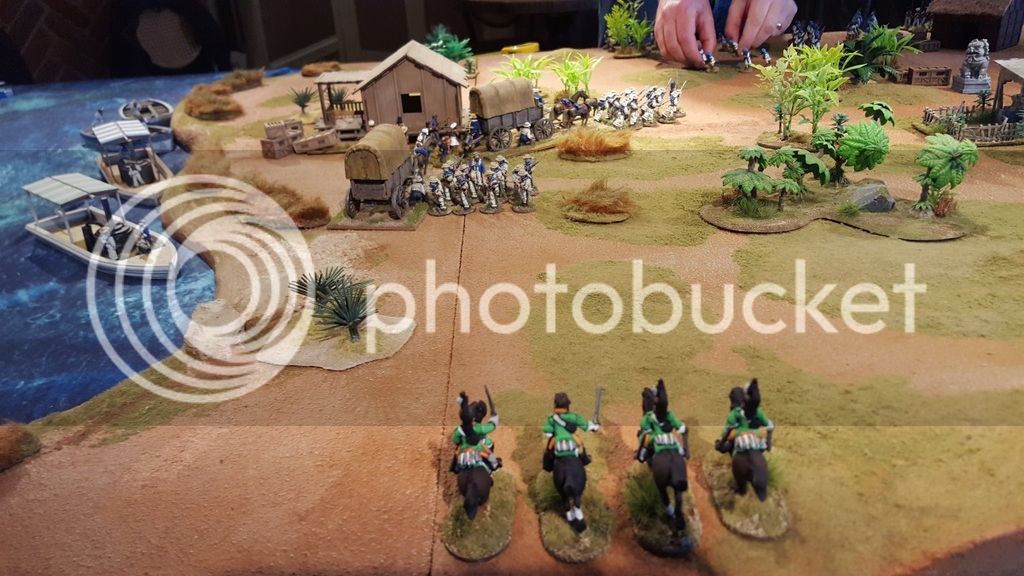 And so, a long drive back home on Sunday and now I’m already looking forward to the next get-together – November’s ancients bash in Newark.

A bit late in posting about this, but never mind…

Over the first weekend of October I was fortunate enough to take part in a multi-player refight of the Battle of Leipzig 1813. This was put on by Alex Testo, who is one of the original authors of the DBN rules and who runs a very nice hotel in Scarborough. October being closed season, Alex likes to arrange a big game for people to come and play, and to stay in residence over the weekend. I attended the Gettysburg game a couple of years ago and when I heard about this year’s subject battle, I signed up immediately as it’s one I’ve always been fascinated by.

In the end there were 10 players (some of whose names I’ve forgotten in the intervening weeks – sorry) who assembled on Friday evening to receive a warm welcome from Alex and his family, an introduction to the custom-built table, the rules and the background to the battle itself. Then off for an excellent fish and chip supper, followed by some social time over a beer or two, during which we divided into two sides/teams to look over the table and forces, and make some plans for the battle.

Some of the armies, laid out by Corps: 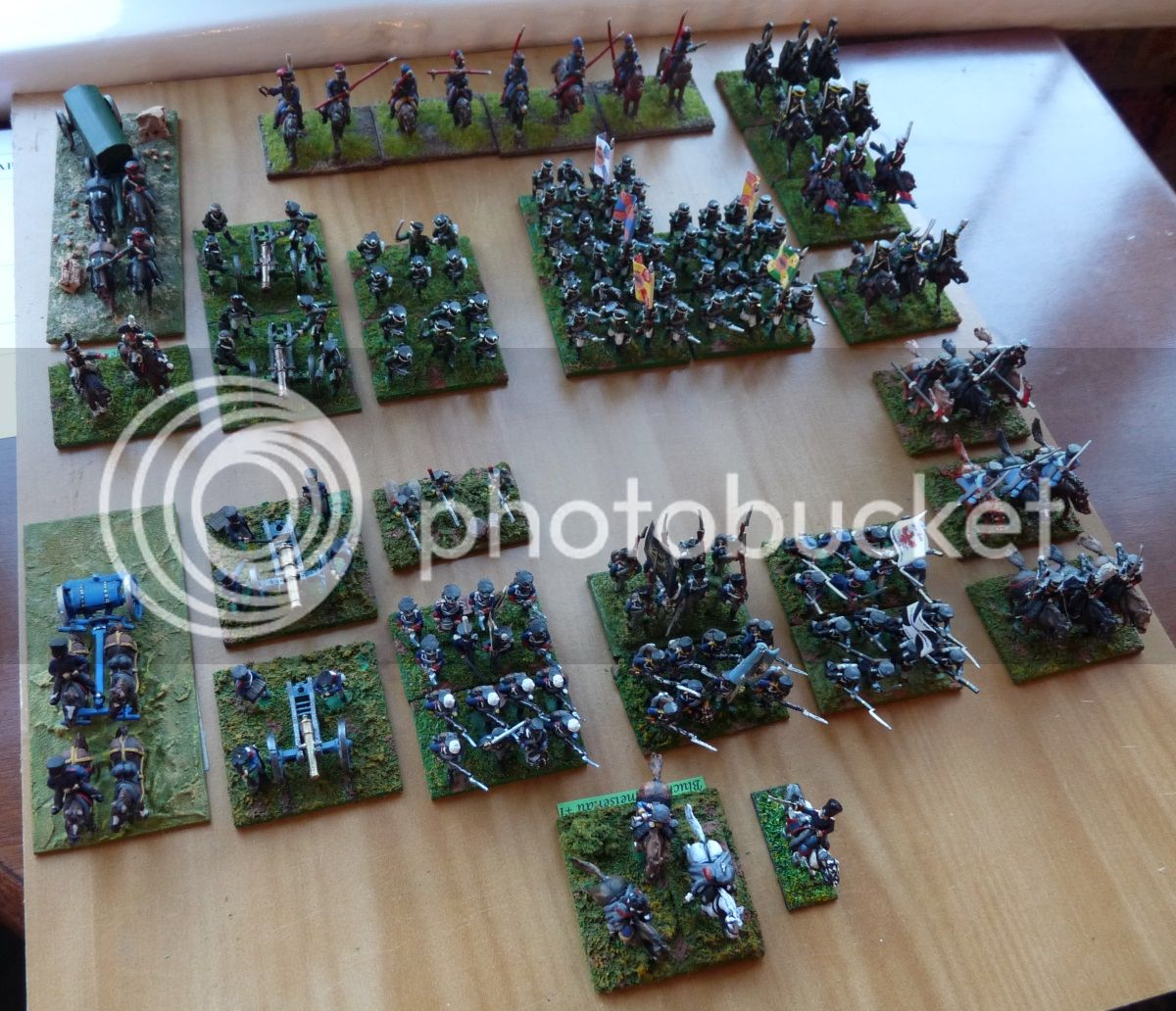 I fancied playing on the French side and duly became that dashing fop, Murat. Our leader was Phil, who made a fine Napoleon (or possibly Custer), and our plan was reasonably historical – to hold Blucher in the north and try to bash the Army of Bohemia among the high ground and villages in the south. I had the left flank, from Liebertwolkwitz onwards, to defend against hordes of Austrians, Russians and Cossacks.

We hid the whole army behind the high ground and villages, leaving only 2 artillery batteries in view. The enemy didn’t seem fazed, and deployed in strength pretty much everywhere.

Needless to say, a 2-day multi-player wargame is about as difficult to accurately recount in detail as a real battle, so I won’t be attempting this!

The gist is that there was hard fighting everywhere, with the allies trying to take Mockern in the north in the face of desperate defending by the French. There were cossack shenanigans all over, trying to get behind the French into the baggage and to occupy objectives (fortunately I dealt with the attempt on my flank).

Mockern as the storm approaches: 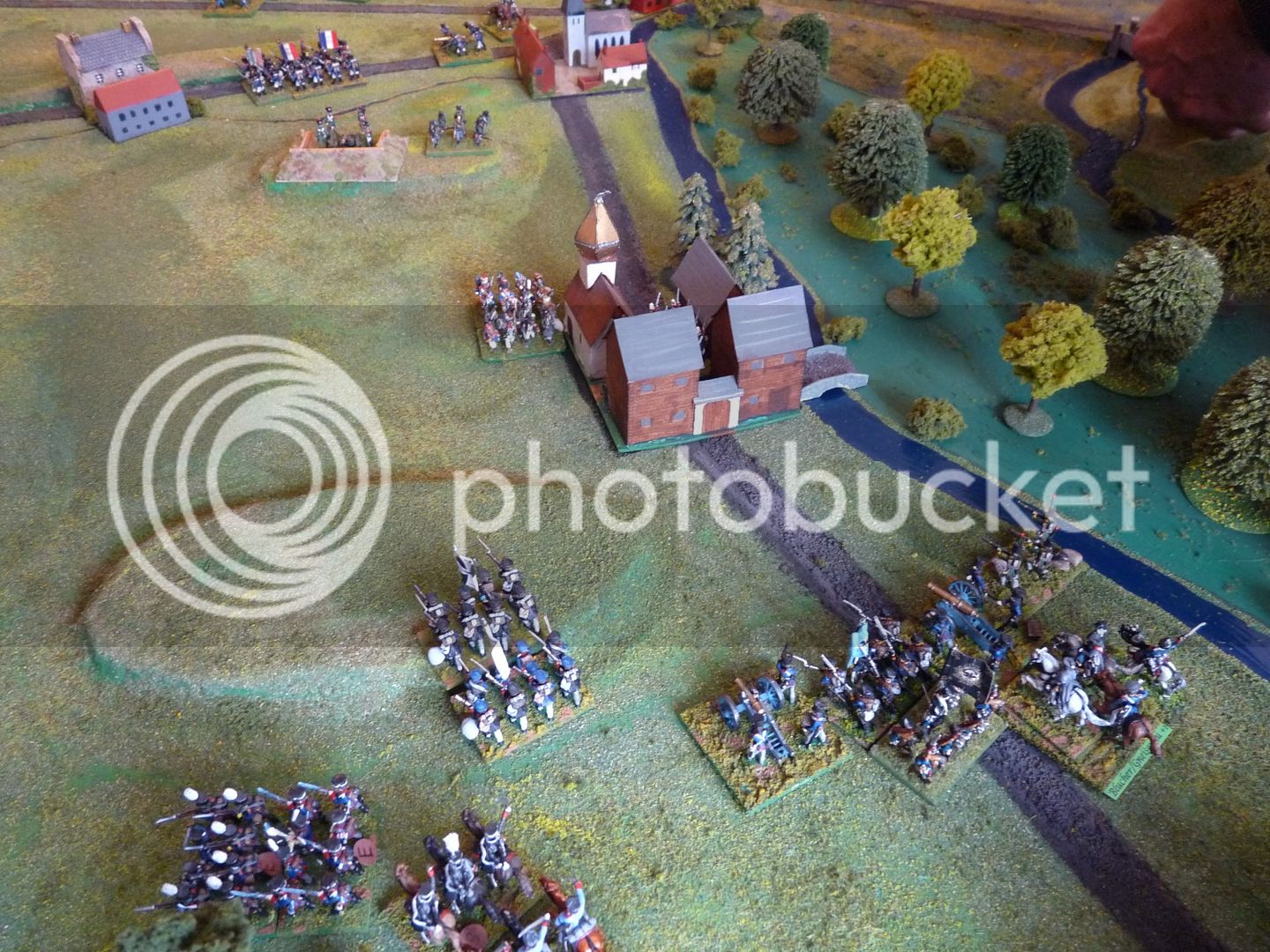 The big fight was around Liebertwolkwitz, stretching away to both to me on the left, and the Imperial Guard on the right flank. Everyone seemed to have good and bad turns, and the combat swayed back and forth around the villages and ridges. The Guard went in, and a lot of it went down, but not before taking a lot of Prussian and Russian Guard with it.

The Austrians under Simon tried to swoop on Lindenau to block the French escape route, but they seemed to be walking in treacle and took an age to deliver their assault. He took the gibes well though 🙂

Leipzig and its garrison:

I got hold of the Reserve Heavy Cavalry Corps (lots of tough elite Saxons, etc) and managed to crush much of the enemy’s right flank, shoring up my own position at the same time. That was a lot of fun, and a highlight for me!

At the end there was a very fine line between winning and losing, and it came down to a couple of key combats to see which army would reach its break point first. The French just fell short, and Napoleon would once again have to retreat over the river to live to fight another day.

All in all it was a brilliant weekend, with very good company and an excellent game that played out so well. The social side was very good too, including some beer and curry on the second evening, and lots of banter throughout the two days. Thanks go to Alex and family for putting on such a great event, and I look forward to another one of these weekends next year hopefully.