I’ve been carrying on with painting the Prussians and Austrians for this project, and the forces are growing slowly but steadily.

I’m aiming to develop the armies in reasonable proportions so I can get some use out of them as they expand – in other words I’m not painting all the cavalry first, for example. The Austrians have received the most attention so far, partly because they were starting from scratch, and partly because a fair number of the Prussians need re-basing which isn’t a lot of fun!

For the Austrians I’m painting in batches comprising 5 infantry, 4 cavalry, 1 artillery battery and 1 Grenzer unit, plus commanders. I have about 7 or 8 of these batches to do to end up with the overall army I’m after. I’m currently painting the infantry that will complete batch 3.

For the Prussians the batches are a little smaller, due to the make-up of the army. They’re running a batch behind the Austrians – although there’ll be some quicker catching up once I’ve done a bunch of re-basing.

The Prussians so far: 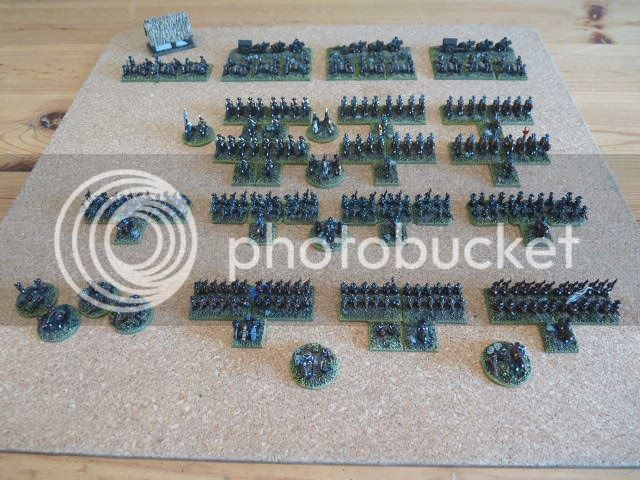 I’ve found myself putting a bit more effort into the flags than I thought I would, no bad thing I guess. They’ll certainly do for me. I wasn’t going to do anything more for cavalry standards than just paint the base colour but I’ve done a bit more for the first Prussians and may now have to go back to do something on the Austrian ones too.

Lots more to do, but I’ll get there eventually!

6 thoughts on “Some Progress on the 6mm SYW Armies”