Last weekend saw a dozen gamers gather together from far and wide (Scotland to Essex anyway) to celebrate Goat Major reaching extreme old age and to play some games of Lion Rampant.

The venue was Foundry’s premises at East Stoke Hall, and they generously laid on some superb terrain tables for us to use. Even if you don’t collect their figures it’s a great place to visit, as their ranges are extensive and go on for room after room. The recent addition of a huge display cabinet with thousands of beautifully painted figures is a real treat too. I have to admit that their old fantasy ranges got me interested, with a Frostgrave project to get back to sometime..

We had a great day, with 3 x 4 player games in the morning, using scenarios from the rulebook and card-driven random player activations. It worked very well and the guys on my table (Iain, Andy and Dave) had a lot of fun watching Iain hide (but win..) and Dave/Buff get massacred. The boasts element of the game is interesting and adds some characterisation and storyline to the on-table action, beyond just going for the objectives and killing the enemy. Not having painted my own retinue yet, I was very grateful for the loan of a lovely Wars of the Roses force from Gary. It was a small, tough, force of 4 x 6 point units and was interesting to use. That said, even a small force can be difficult to do anything with if you fail your first activation roll..

GM had worked up an interesting back-story and we were all fighting for either the King or the Usurper, as well as for ourselves. Scores were kept (I scored a net zero in the first game once I’d deducted unfulfilled boasts from the tax points I gathered!) and added to a scoreboard where both individual and team progress was recorded.

Some action from the morning game I played in: 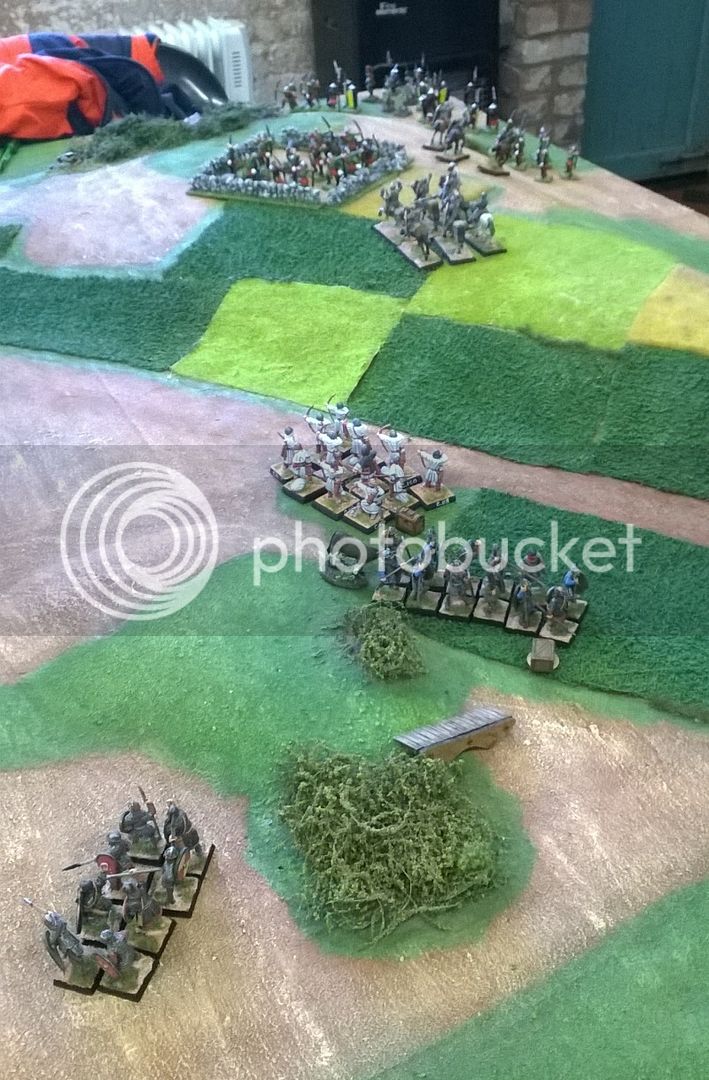 After lunch we put all the tables together and set up for a big 6 v 6 bash, with players’ positions drawn randomly along their faction’s baseline. We had 3 objectives to fight for overall. There must have been over 500 figures in use, so it was a BIG skirmish game, but actually it played very smoothly and I think it demonstrated the flexibility of the rules. We reverted to IGO-UGO, with each side of the table taking its turn before swapping back to the other side.

Inevitably the game provided some excellent moments and a lot of entertainment, and after a couple of hours we had a result (by which time there were far fewer figures on the table). Scores were counted up (I scored about 8 this time, which at least contributed something to the Usurper’s side which I was on) and individual and team winners were declared.

Somehow Iain, who’s courage and parentage have since been extensively (and quite rightly) questioned on the LAW forum, won the Best General award amid great mirth and mockery. All’s fair in war and wargaming though, so well done Iain. The Usurpers won the overall campaign though, so a new and enlightened era was heralded.

Then we packed up and went off to warm ourselves up (it had been a cold day!) with a beer and curry night in Newark. All in all an excellent day with a lot of fun, good company and good gaming.

I like the Lion Rampant rules and the games they generate, and it’s very easy to pick up and get stuck in. I have the Normans in Italy retinue planned, and intend to switch my 15mm Dark Ages collection to this as well in the future.