I’ve had a fantastic day at the Partizan show today. Normally I just turn up, wander round looking at the games and buying stuff for a couple of hours, and go home fairly happy. Today I was participating in the ‘A Military Gentleman’ forum group game with about 20 other members, and had an excellent time. It was also nice to have a catch up on the Saturday with Iain, Andy and, briefly, Simon. We visited the new Civil War museum in Newark, which was interesting, and enjoyed a fairly sensible (we had early starts!) evening out and a good natter.

At the show, Graham Cummings had organised things very well and, with the help of others, put a lot of effort into making the game a big success. Members of the forum (which is run by John Ray, and comprises people who have bought the book of the same name) came with their figures from far and wide; from Scotland to Plymouth, and Jim Purky came from the US to be part of the event. Everyone seemed thoroughly delighted to be there and I think lots of fun was had by all. There was a social side too, with people meeting up in their various hotel locations and we all had a chance to put faces to names we’ve become familiar with on the forum.

There were actually two battles being played out at the same time on adjacent tables, effectively re-fighting Ligny and Quatre Bras but using our 18th century armies. The rules were Charles Grants’ ‘The Wargame Rules’ and we had a pre-game briefing on the rules and scenarios by the man himself, who was chief umpire for the day and a pleasure to meet.

The tables were laid out with a teddy bear fur terrain, prepared by Graham and the best I’ve seen done. Other features included extensive streams, roads shaved into the ‘grassland’ and buildings from Phil Olley’s collection. With the figures in place, and some gorgeous collections were represented, it all looked superb and seemed to go down well with show attendees.

As ever, Kelham Hall was very dim inside, so taking decent pictures was a challenge. My phone did OK, but hopefully there will be some better shots appearing on the web at some point. 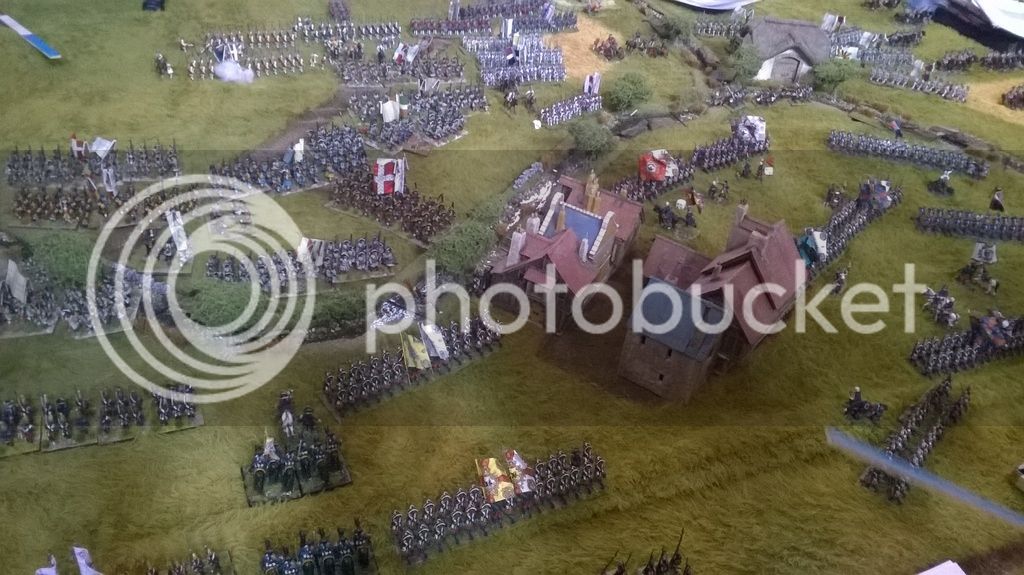 I played on the larger Ligny table, holding the right flank of the ‘Prussian’ army, which was in fact largely represented by Prussian mid-18th century forces. Alongside me were Jim Purky from the US (of Fife & Drum and Minden Miniatures), who was a pleasure to meet and fun to play the game with, and John Ray, who’s figures graced the table and held the centre. Colin and Dave (Jarvis, who painted my hussars for me and which fought as well as they look) formed our left flank, which they held in style throughout, fighting the hordes of French that were thrown at them.

Although we all spent a lot of time welcoming and talking with people who came over to see what we were doing, we actually got through a lot of gaming. I think we managed 7 full turns, which considering the number of players and figures, and a general lack of familiarity with the rules, was quite good going. There was certainly plenty of battle, and everyone seemed to have a fair share of highs and lows. I fought opposite Guy and John (who fortunately knew the rules and guided us through, which was hugely helpful) and they were very gentlemanly opponents.

Overall I think we held our own, having some good musketry successes and, after a very poor start (a 6-0 drubbing!) even started to get the better of the enemy cavalry in melee. Our position was finally imperiled on the last turn with the arrival of D’Erlon’s corps (or at least some tricorned fellers standing in for them) who had actually made an appearance in this re-fight – unlike in the real thing. Charles declared a good defence by the Prussians, but an inevitable (though orderly) withdrawal. We’d be intact to fight another day, so honours were pretty even. On the other table the allies held back Ney’s French after a bloody fight, and the players had a good game there too.
I did get to have a quick wander round during a break in play, and managed to buy a few bits and pieces. A few more boats and small bits of scenery, so not too much lead. That said, I did pick up a few Minden cavalry from Gary, so they’ll go into the schedule for later this year.

After over 30 years of wargaming, this was definitely a high point for me, The spectacle of the game, the camaraderie and friendliness among the group, and sheer enjoyment of fighting the battle, all contributed to an unforgettable day. There were even some thoughtful gifts from John and Jim as mementos of the day, which was much appreciated. I also met Mark Allen, a very friendly and talented chap whose work I have admired over the years, and we agreed a plan for him to paint some flags for me.
Fantastic all-round!

10 thoughts on “AMG Game at Partizan”