Very late in posting this one, but a few weeks ago I had my first game (one and a half actually) of Frostgrave, courtesy of Goat Major’s hospitality and excellent Oriental-style table set-up. As you can see from the pics below (and here: http://goatmajor.org.uk/ on GM’s own blog), the game scenery for the fictional sand-bound ruins of Sarapur was top-notch!

We each selected a starter warband, with GM going for an Illusionist and me a Necromancer. This allowed me to have a very useful spread of spells, including the handy Bone Dart missile attack, and the very entertaining Raise Zombie option. My tame zombie ‘Alan’ was a slow-moving plotline all of his own, and managed to make a bit of a nuisance of himself, albeit having to be resurrected a couple of times.

We played an initial game with a half-warband force each as a learning exercise, which was very effective as a way to get to grips with the rules without being bogged down with too many figures and capabilities. I managed to kill the Illusionist with a bone dart towards the end, but of course we weren’t counting the results of this test game towards the campaign 🙁

Then we got into the main event – a full-sized game using the Mausoleum scenario, which sees skeletons issuing forth from the central building and causing plenty of mirth and mayhem while we tried to acquire treasure and fight each other.

The rules provide an interesting, fun and unpredictable game, and the wide variety of spells offer lots of tactical options for aiding your own side, hindering your opponent and securing treasure, etc. GM used Push effectively – on his own guys (to speed them on their way once they’d picked up some treasure), mine (off a roof) and on wandering monsters to deposit them in combat with my force. I used wall of fog to provide cover from archery, telekinesis to pick up treasure, etc. It’s an exercise in cunning and sneakiness and very enjoyable all-round. My apprentice was a liability, failing enough casting attempts to inflict a lot of damage on himself! 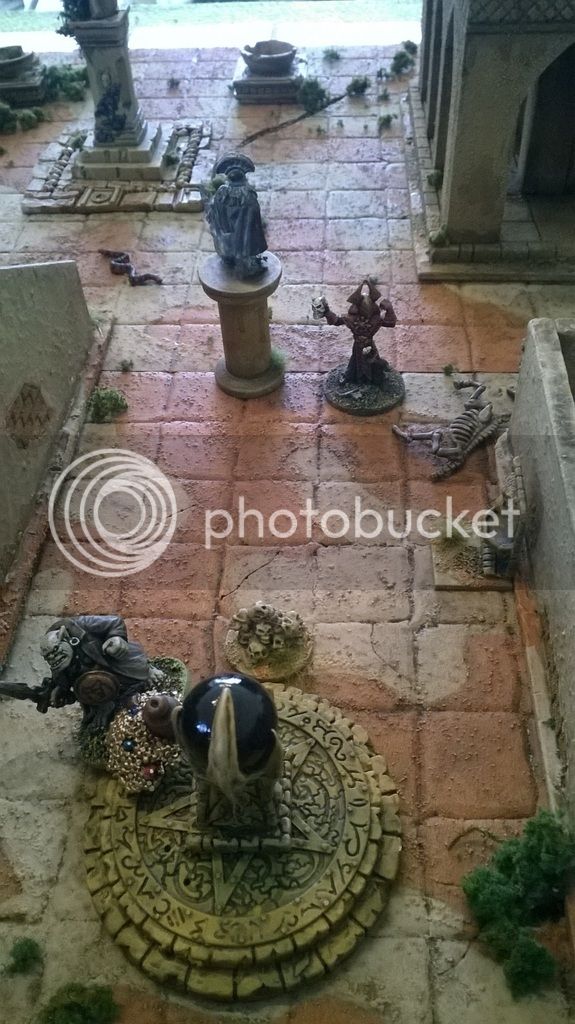 The game ended with most of the hired help out of action and our wizards both decided that to stay any longer was to court potential disaster. We both had treasure and called it a day at that point. We rolled up our loot, and will give some thought to new spells, etc, between games.

The d20 system for combat threw up a handful of big results (eg. my Templar going down in his first round of combat to a thug..), but we felt this was in the spirit of a fun, wizard/magic-centric game and not a problem. Overall, the Frostgrave experience is a very good one in my opinion, and we will be returning to Sarapur to continue our campaign soon I hope.

2 thoughts on “Frostgrave in the Sand”