With a little bit of the festive season, and more importantly some holiday, still left I decided it was a good opportunity for a small solo game – so yesterday out came the winter terrain boards and fir trees. Although there’s been no white Christmas here what better to fight than a battle in the northern snows of Warhammer’s Old World? Now, I don’t play Warhammer, or fantasy in 28mm at all for that matter, but I do like the GW background, setting and armies and have applied it to my 15mm collection, fighting under home-grown rules written by my friend Jase. By following this path I have, like a typical wargamer, made things difficult for myself, with lots of hunting for appopriate figures, converting and compromising, but it’s been fun along the way!

I’ll post more about these armies before long but for now, it’s off to a remote, frozen location in the border wilderness of Kislev where the forces of chaos have once again come south for blood and destruction…

Barked orders echo among the trees as the panting, heavily
encumbered men hurry through the snow. Their exertions produce plumes of steaming
air, all thoughts of the day’s freezing cold forgotten while the soldiers’
urgent march continues. Then, with little warning, the dimness of the forest
gloom is lifted as the trees thin and the blue coated columns stumble into the
relative light of the iron grey sky, now open above them.

Ahead is a pale expanse, dotted with tall copses, stretching
off towards the dark forest wall to the north. With no time to take their
breath the men are led on, over white, rough stubbled, fields towards the
woodsmoke and church dome ahead, beyond which they are ordered into position
and hustled back into formation. Now their training takes over; packs are
loosened, heavy handguns gratefully grounded and oilskin covers removed from long
axe blades. The men, seasoned in war, know without looking that the rumble they
feel through their boots is caused by their light horse auxiliaries sweeping
past into position on their flanks, just as they know now to turn their
attention to the far tree line as the air, and the birds, become still. Eyes
narrow and blood quickens, but there is no shiver of fear through the ranks. Their
calm and strength return as the familiar words are spoken by officers and
priests, the chanted cadence pervades all and the men reply with their hard-edged
roar as they renew their bonds of duty and honour. They expect no one to come
to their aid but have followed their warrior Queen here and now stand as
comrades, shoulder to shoulder, defending sacred ground.

The silence ends when the horns begin to bray and flickers of
movement creep amongst the dark trees, but the men, blowing on their matches
and saluting their brothers in arms with flasks of hard spirit, stand ready.

An army of Beastmen has stuck from deep within the forests
to the north, overrunning the lightly-manned watch posts, though not before a
lone messenger escaped to bring news of the threat. The hastily-assembled local
militia were no match for the horde of ferocious creatures that swept bloodily
through the first villages and within two days the chaos horde was closing in
on its true prey – the inhabitants of the village of Noëlev and their priestly
guardians in the church of St Nikolas. However, as the cold, grim day moves
past noon the tramp of marching feet announces the arrival of units of the
field army under the command of the Ice Queen herself. Unfortunately for the
Kislevites, their winged hussars were elsewhere when the urgent news came, so
the army comprises Kossar infantry and Ungol light horsemen only. Before marching, the
Queen despatched a request for aid to a nearby contingent of Empire troops that
had been assisting Kislev in its winter patrols. It is hoped that the courier
found these comrades in arms, but even if he did there is no certainty that
they would arrive in time..

Played on a 4’ x 3’ table. The village of Noëlev and its holy
church of St Nikolas are in the middle of the Kislev deployment area, 3 squares
in from the southern base edge. Additionally, 1dAv of further ‘bad going’ 4” squares
are placed randomly on the table, containing forest. Remaining trees to be placed aling the northern board edge as background scenery.

The Beastmen must capture the church to destroy the holy
order that resides there and bring their darkness to this remote part of
Kislev. The defenders must prevent this from happening.

The Beastmen army is a standard army which can deploy up to game
2 squares onto the table from their base edge. The defenders are split into 2
parts; 2 ‘forces’ worth from Kislev, which begin deployed on the table up to
their deployment line, 3 squares in. The 3rd force consists of
Empire troops hurrying to support them. They will arrive in the turn that the
Kislev player scores a total of 6 when adding the score on a d6 to the turn
number. This roll is made at the same time as his CP rolls. The Empire units
all come on either to the east or west of Noëlev, as the defending player
chooses.
Special Rules

The Guardians of St Mikail

The church of St Mikail is home to an order of warrior
priests who will stand with their Kislev and Empire comrades in defence of
their holy shrine. A warrior priest will automatically join any defending unit
occupying the church and fight with them using the normal rules, with the
exception that they have a free power point per turn which can only be used to
boost the morale of the unit within the church’s 2 squares, although it can still
be used offensively against a Beastmen unit in an adjacent square. The warrior
priest cannot leave the church squares, and if killed is automatically replaced
the following turn by another member of his order. Should the Beastmen capture
the church and win the battle (see below) it is assumed that all of the priests
have been killed.

The game continues until one side or the other is
victorious, see below.

The Beastmen win if they capture both the squares containing
the church (ie. there is no defending unit contesting it). They will be
considered to have achieved this is they defeat the defenders according to the
standard rules for victory, as the defeated army would retreat. However, to
reflect the religious and patriotic nature of the defence of the church, the
defenders’ Army Morale breakpoint is 16 points rather than the standard 14. If
the Beastmen fail to win (ie. are defeated through reaching their own Army
Morale breakpoint), the defenders are victorious.

The beastmen emerge from the dark forest

The armies drawn up, but will the Empire allies arrive in time to help? 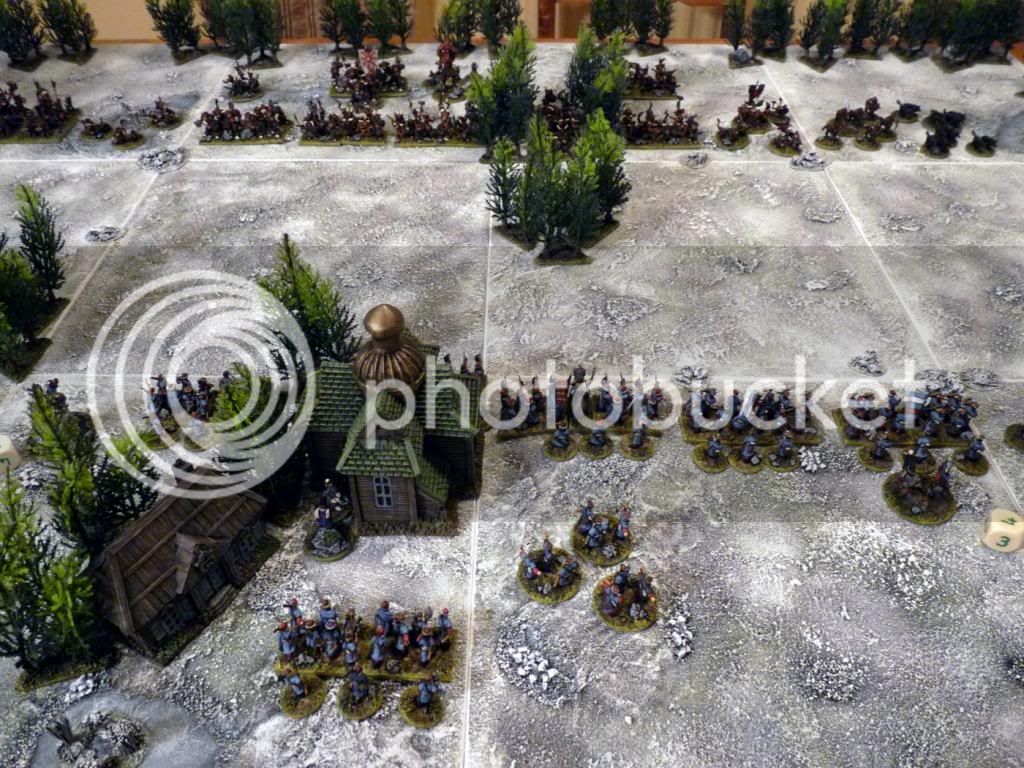 The Ice Queen herself, ready to lead her men in the defence of this holy place

Next time, the action!